From his father, he implemented  assertiveness and determination, while from his grandfather, he emulated compassion and generosity. Affection sometimes sheds assertiveness, humility is often the opposite of assertiveness. However, in the person of mbah Moen, all of that is synergized in a balanced way. The sharpness of coastal life did not make his attitude harden too.

He is the perfect image of a well-mannered and mature personality. All of that is not a coincidence, because from he was young, he lived in the pesantren tradition was directly cared for by his own father and grandfather.

Mbah Moen finished his single life by marriying a daughter of Mbah Sambu Lasem’s descent, Nyai Hj. Mati’ah. From his marriage, Mbah Moen was blessed with ten children, eight boys and two girls. The names of his sons and daughters are:

KH. Maimoen Zubair passed away in Mecca, Saudi Arabia, on Tuesday, August 6, 2019 in the morning, to celebrate the Haj pilgrimage. He died at the age of 90 years.

In his educational history, since childhood Mbah Moen has been directly guided by his parents with strong religious knowledge, starting from memorizing and understanding the knowledge of Shorof, Nahwu, Fiqih, Manthiq, Balaghah and various other Syara’ Sciences.

In 1945 he started his education at Pondok Lirboyo Kediri, under the guidance of KH. Abdul Karim or who is usually called Mbah Manaf. Apart from Mbah Manaf, he also received religious knowledge from KH. Mahrus Ali is also KH. Marzuqi. After that was done, then he returned to his village, practicing the knowledge he had got. Then in 1950, he went to Mecca with his own grandfather, namely KH. Ahmad bin Syu’aib to study with scholars in Mecca. Among them are Sayyid Alawi al-Maliki, Sheikh Al-Imam Hasan al-Masysyath, Sayyid Amin al-Qutbi, Sheikh Yasin Isa al-Fadani, Sheikh Abdul Qodir al- Mandaly. There he studied for 2 years.

After he felt that he was sufficient to obstain knowledge, finally Mbah Moen returned to Sarang and served the community there. In 1965, Mbah Moen established Pesantren Al-Anwar. This Pesantren then became a reference for parents, to board their children to study the yellow book and turats. Finnaly, the people of Sarang got to know KH. Maimoen Zubair as a charismatic Islamic scholar figure.

Careers in politics and at Nahdlatul Ulama (NU)

Beside being a caretaker for Pesantren Al Anwar Sarang in 1971. Mbah Moen went into politics as a member of the board of People representative for the Rembang region until 1978. Then in 1987, he became a member of People’s Consultative Assembly from Central Java until 1999. Then during his political position in the Indonesia People’s Consultative Assembly, Mbah Moen was also known to be active in Nahdlatul Ulama from 1985 to 1990, Mbah Moen had served as Chairman of the Syuriah Nahdlatul Ulama of Central Java Province. He was also the chairman of Jam’iyah Thariqah Nahdlatul Ulama.

From 1995 to 1999, Mbah Moen was also active in party such as being the chairperson of the MPP for Partai Persatuan Pembangunan (PPP) party, and later as chair of the PPP Syariah Council since 2004.

1. Kiai Abdul Wahid Zuhdi (he has wider sight or mutabahhir)
2. Gus Anam (as known as  rojul kamil because of his memorizing)
3. Gus Baha' (Islamic student who fast to memorizing, he is like a book) 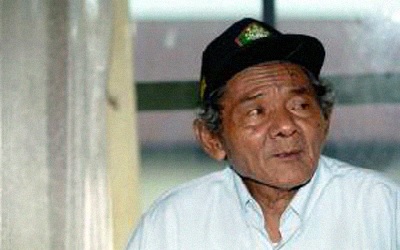