His father, Sheikh Umar al-Bantani, was a scholar figure who still had a kinship relationship with Maulana Syarif Hidayatullah or Sunan Gunung Jati (Cirebon) until Muhammad SAW.

Sheikh Nawawi passed away in Mecca on the 25th of Shawwal 1314 Hijriyah or 1897 AD. His tomb is located in Jannatul Mu'alla, Mecca. His grave is next to the tomb of Sayyidina Abu Bakr Ash-Siddiq's daughter, Asma΄ bint Ab Bakr al-Siddq.

Even though he passed away in the Arabian land, until now every year there is always a commemoration of the death of Sheikh Nawawi al-Bantani in the country, to be precise at the pesantren An-Nawawi Tanara, Serang, under KH. Ma'ruf Amin. Haul Sheikh Nawawi is always crowded with Nusantara students, even foreign country.

2. Sanad Sanad of Knowledge and Education

Since he was five years old, Syekh Nawawi has started to study Islam directly from his father. Together with his siblings, Sheikh Nawawi studied basic knowledge of Arabic, fiqh, monotheism, the Qor’an and interpretation. At the age of eight years with his two younger siblings, Tamim and Ahmad, Syekh Nawawi studied with KH. Sahal, one of the famous ulama in Banten at that time. Then continue the activity of studying with Sheikh Baing Yusuf Purwakarta.

He teaches in his yard. At first there were only tens of students, but as time went on the number grew more and more. They come from all over the world. Until he became Sheikh Nawawi al-Bantani as a scholar who was known to be skilled in the science of religion, especially about monotheism, fiqh, interpretation, and tasawwuf.

After three years living in Mecca, in 1828 AD, Sheikh Nawawi finally returned to Banten. arriving in his homeland, he witnessed many practices of injustice, arbitrariness, and oppression by the Dutch East Indies government against the people. By seeing the reality that was so unjust, the surge of jihad flared up.

As an intellectual who has a high commitment to the principles of justice and truth, Syekh Nawawi then preached around Banten waging resistance against the invaders until the Dutch government restricted his movements, such as being prohibited from preaching in mosques.

In fact, later he was accused of being a follower of Prince Diponegoro who at that time was waging resistance against Dutch colonialism (1825 - 1830 AD), until he finally returned to Mecca after pressure from the Dutch to expel him, right at the peak of the Prince Diponegoro Resistance in 1830. in Mecca he immediately returned to deepest the knowledge of religion to his teachers.

Sheikh Nawawi became famous when he settled in Shi'ib 'Ali, Mecca. He teaches in his yard. At first there were only tens of students, but as time went on the number grew more and more. They come from all over the world. Until he became Sheikh Nawawi al-Bantani as a scholar who was known to be skilled in the science of religion, especially about monotheism, fiqh, interpretation, and tasawwuf.

The name of Sheikh Nawawi al-Bantani became more famous when he was appointed as the Imam of the Grand Mosque, replacing Sheikh Achmad Khotib Al-Syambasi or Sheikh Ahmad Khatib Al-Minangkabawi. Not only in the cities of Mecca and Medina, he is known, even in Syria, Egypt, Turkey, and even Hindustan, his name is so famous.

Sheikh Nawawi held a central role among the ulama al-Jawwi. He inspired the al-Jawwi community to be more seriously involved in Islamic studies, but also played a role in educating a number of prominent Islamic boarding school scholars.

For Sheikh Nawawi, the Islamic community in Indonesia must be freed from the shackles of Colonialism. By achieving independence, Islamic teachings will be easily implemented in the archipelago. This thought encouraged Syekh Nawawi to always follow the developments and struggles in the country of the students from Indonesia and contribute his thoughts for the progress of the Indonesian people.

In addition to religious lessons, Sheikh Nawawi also taught the meaning of independence, anti-colonialism and imperialism in a subtle way. To produce patriotic cadres who will later be able to uphold the truth. Syekh Nawawi's struggle was not in the form of a physical revolution, but through education in fostering the spirit of revival and the spirit of nationalism.

In addition, the development efforts carried out by Sheikh Nawawi for the al-Jawwi community in Mecca also became a serious concern of the Dutch government in Indonesia. The productivity of the al-Jawwi community to produce alumni who have the integrity of religious scholarship and the spirit of nationalism is a concern for the Netherlands.

This opinion is based on the findings of Sheikh Nawawi regarding the legal provisions in Islamic teachings. Sheikh Nawawi even advised Muslims to respect the tombs of people who have contributed to the history of Islam, including the graves of the Prophet Muhammad SAW and his companions.

According to Sheikh Nawawi, Visiting the grave of the Prophet Muhammad SAW is a worship practice that is identical to meeting face to face (tawajjuh) with the Prophet and reminds the greatness of the struggle and achievements that deserve to be imitated.

Sheikh Nawawi's intelligence and wisdom are unquestionable. The Egyptian cleric, Sheikh 'Umar 'Abdul Jabbar in his book "al-Durus min Madhi al-Ta'lim wa Hadlirih bi al-Masjidil al-Haram" (several past and present studies on Modern Education in the Grand Mosque) wrote that Syekh Nawawi has been so productive in writing that his works have reached more than a hundred titles covering various disciplines, many of which are in the form of syarah or commentaries on classical books.

Some of Sheikh Nawawi's works include the following:

In addition, his commentary, al-Munir, is very monumental, some even say it is better than Tafsir al-Jalalain, the very famous work of Imam Jalaluddin as-Suyuthi and Imam Jalaluddin al-Mahalli. while Kasyifah al-Saja is a syarah or commentary on the book of fiqh Safinatun Najah, the work of Sheikh Salim bin Sumeir al-Hadhramy.

5.1 The Forefinger Shines and Can Be a Light

Once upon a time on a journey in syuqduf (houses on camel backs) Sheikh Nawawi once composed a book using his index finger as a lamp.

This happened because there was no light in the shuqduf he was traveling in, while the idea of ​​writing a book was rapidly filling his head. Sheikh Nawawi then prayed to Allah so that his left index finger could become a lamp, illuminating the right finger that he would use to write. The book which was later born with the name Maraqi al-'Ubudiyyah syarah Matan Bidayah al-Hidayah had to be paid for with a defect on the left index finger, because the light that Allah gave to his left index finger carried a mark that did not disappear.

5.2 Seeing the Kaaba from a Distant Place

He also showed another character of Sheikh Nawawi when he visited the Pekojan Mosque, Jakarta. The mosque built by Sayyid Uthman bin 'Agil bin Yahya al-'Alawi (Betawi mufti descendant of the Prophet Muhammad) is still not facing the Qibla direction. In fact, it was Sayyid Uthman himself who determined the qibla for the mosque.

That way, when Sheikh Nawawi, whom he considered just an unknown teenager, blamed the determination of the Qibla, Sayyid Uthman was very surprised. Discussions ensued between the two of them, Sayyid Uthman still held that the Qibla of the Pekojan Mosque was correct, while the teenage Sheikh Nawawi was of the opinion that the direction of the Qibla should be corrected. When an agreement could not be reached because each of them defended his opinion vehemently, the teenage Sheikh Nawawi pulled Sayyid Uthman's sleeve and brought his body together so that they could be closer to each other, then said:

Sayyid Uthman was stunned. The Kaaba that he saw by following the index finger of the teenage Sheikh Nawawi was clearly visible. Sayyid Uthman was amazed and realized that the small teenager in front of him had been blessed with glory, namely the opening of nur basyariyyah.

With that speciality, wherever he is the Kaaba will still be visible. With great respect Sayyid Uthman immediately hugged Sheikh Nawawi's small body. Until now, in Pekojan Mosque, it will appear that the Qibla has been shifted and does not match the original.

5.3 The Body That Remains Intact

It has been the policy of the Government of Saudi Arabia that people who have been buried for a year must have their graves dug up. The bones of the corpse are then taken and put together with the bones of other corpses. Furthermore, all the bones were buried in another place outside the city and the grave that was dismantled was left open until the next body came one after another. This policy was carried out indiscriminately until it also hit the grave of Sheikh Nawawi.

After his grave was one year old, officials from the city government came to dig his grave. But what happened was an unusual thing. The cemetery officials did not find the usual bones, what they found was a body that was still intact. Nothing less, no abrasions and no signs of decay like a corpse that has been buried for a long time. Even the shroud covering the body of Sheikh Nawawi was not torn and not rotten at all.

The incident shocked the officers. They rushed to their boss and told him what had happened. After being investigated, the superior then realized that the tomb that was excavated was not someone's grave. For such an incident, finally, the government forbade the dismantling of Sheikh Nawawi's tomb. His body was then reburied as usual, and until now the tomb of Sheikh Nawawi remains in Ma'la, Mecca.

5.4 Prayer in the Mouth of a Big Snake

One day while on his way, Sheikh Nawawi rested in a place for the call to prayer and then prayed. After he got the call to prayer, it turned out that no one came, he finally finished and prayed alone. After the prayer, Sheikh Nawawi continued his journey, but when he looked back, there was a giant snake and his mouth was gaping. Finally he realized that he was praying in the mouth of a very large snake.

Among the honorary titles assigned to Sheikh Nawawi al-Bantani are as follows: 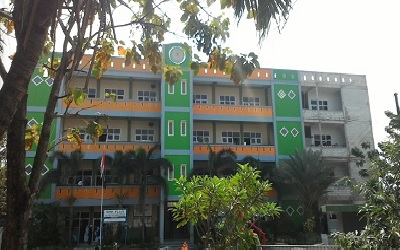